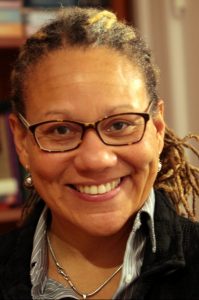 Dr. Kathryn Hall is Associate Molecular Biologist and Assistant Professor in the Division of Preventive Medicine at Brigham and Women’s Hospital and Director of Placebo Genetics in the Program in Placebo Studies at Beth Israel Deaconess Medical Center. After receiving her PhD in Microbiology and Molecular Genetics from Harvard University, she spent 10 years in the biotech industry tackling problems in drug discovery and development. First at Wyeth (now Pfizer) and then at Millennium Pharmaceuticals (now Takeda) where she became an Associate Director of Drug Development.

Dr. Hall returned to Harvard Medical School in 2010, joining the Fellowship in Integrative Medicine at Beth Israel Deaconess Medical Center in 2012, and receiving a Master’s in Public Health from Harvard T.H. Chan School of Public Health in 2014. Dr. Hall was the 2015 Harvard Catalyst Program for Faculty Development and Diversity Inclusion (PPFDD) faculty fellow and is the 2019 BWH Minority Faculty Career Development Awardee.

Dr. Hall’s recent research has focused on catechol-O-methyltransferase (COMT), an enzyme that metabolizes catecholamines and estrogen and has pleiotropic effects in a broad set of diseases and treatments, including cardiovascular disease and cancer. Among her accomplishments is a landmark paper identifying COMT as one of the first genetic markers of placebo response, a publication in JCI Insight on the placebo genetic network or placebome.

She was recently awarded a Radcliffe Exploratory Program grant which supported the groundbreaking Placebome in Clinical Trials and Medicine Conference in 2019. Her research has been the focus of numerous articles including features on BBC and in Science, The Atlantic, New York Times, The Economist and Discover magazines. Dr. Hall also has a Masters in Documentary Film from Emerson College.