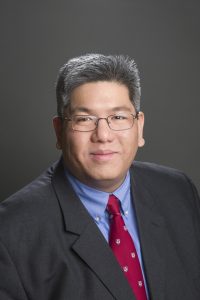 Dr. Lin is the director of the Center for Clinical Spectroscopy at Brigham and Women’s Hospital and Assistant Professor of Radiology at Harvard Medical School. Dr. Lin is a graduate of the California Institute of Technology, where he completed his Masters degree in Bioengineering and his doctoral degree in Biochemistry and Molecular Biophysics.  He began his training as a research associate in 1997 and was appointed Director of Clinical Services and Senior Scientist at the Magnetic Resonance Spectroscopy Unit at the Huntington Medical Research Institutes in 2003. Since that time, he has been a visiting research associate at the Center of MR Research at the University of Illinois Chicago. From 2007 to 2009, Dr. Lin had a research fellowship at the National Heart, Lung and Blood Institute at the National Institutes of Health in Bethesda, MD. Dr. Lin arrived at Brigham and Women’s Hospital in 2009.

Dr. Lin’s research interests include clinical applications of multinuclear magnetic resonance spectroscopy in the brain, breast, and liver, and cardiovascular magnetic resonance imaging. He was awarded the Young Investigator’s Award in 2003 for his work in 13C spectroscopy in Alzheimer’s disease and an NHLBI Fellows Research Award for his work in strain mapping of the carotid arteries in 2007. He was recently awarded a Congressionally Directed Medical Research Program grant from the Department of Defense to study mild traumatic brain injury and post-traumatic stress disorder in soldiers returning from the Iraq/Afghanistan wars. In addition, he has ongoing collaborations with the Boston University Center for Study of Traumatic Encephalopathy to examine the long-term effects of repetitive head injury using magnetic resonance spectroscopy. He has co-authored more than three dozen peer-reviewed publications, five book chapters, and 75+ conference abstracts.

Finally, Dr. Alexander Lin has also been recognized through awards and media reports for his efforts in supporting mentorship, particularly of students of diversity through the laboratory’s involvement in the Student Success Jobs Program and Harvard Catalyst summer research studies. He actively mentors Harvard Medical School students and received a Young Mentor Award from Harvard Medical School. Further, he is  involved in education and training in several international workshops for MR spectroscopy.